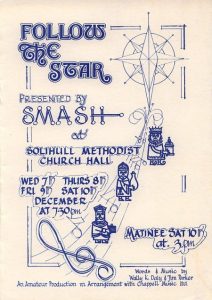 This was the first SMASH production.

Iain Waddell (the director) wrote in the programme:

Follow the Star tells the nativity in a fresh, amusing and joyful way without losing the impact of the basic Christian message. It was first produced at the Chichester Festival Theatre and then at the Westminster Theatre in London in the middle 70s, followed by a television production of the show.

As the show opens we meet God, known as Olly, in his ‘office’ in heaven. He requires an angel to let Mary know that she is about the give birth to a son, and he selects Gabby (Angel Gabriel) for the job. Gabby is delighted because this will give him the opportunity to become taller, as apprentice angels who carry out tasks like this efficiently will then ‘grow a bit’.

We then meet Angel Chicago who is having a very difficult time because he is Herod’s guardian angel. Chicago, a slightly unorthodox angel, is nevertheless a very hard working one. His pleas to Herod to ‘be good’ are largely ignored. Herod continues to hate nice boys and girls and tries to convert those in the audience to evil ways.

Gabby’s appearance to Mary doesn’t go quite as planned, but the audience is encouraged to give him a second chance to grow taller. Meanwhile, three senior angels (Angy, Jelly and Lofty) have been allocated a task. They have to let three wise men know, through reading their books of knowledge, that they should follow a star to find the new King. As Olly says to the audience:

You can cheer your favourite angel,

You can boo the baddies too.

I don’t even mind if you talk together

But don’t fall asleep whatever you do!

There were 33 cast members appearing on stage supported by an offstage choir of 13. 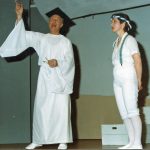 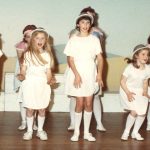 Every time you’re good you grow a bit 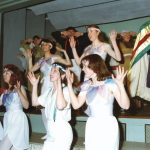 Herod and the angels 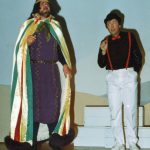 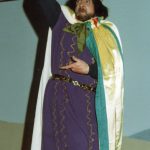 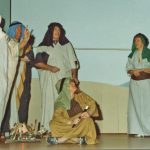 While Shepherds washed their socks 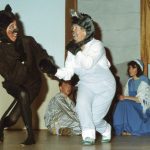 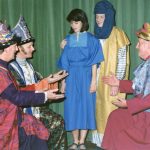 Magi and Mary and Joseph 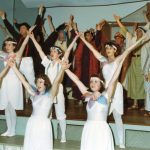