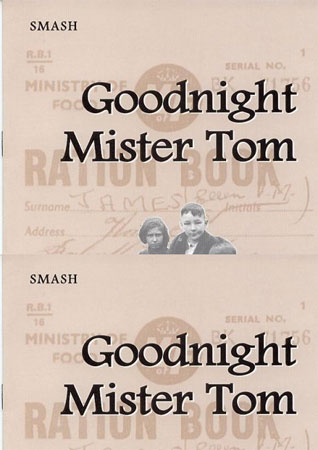 Young Willie Beech is evacuated to the country as Britain stands on the brink of the Second World War.

A sad, emotionally deprived child, he slowly begins to flourish under the care of old Tom Oakley – but his new found happiness is shattered by a summons from his mother back in London…

We were very pleased to welcome the composer, Gary Carpenter, to one of the performances.

WORTH STAYING UP FOR

The intimate Dovehouse Theatre was brought to life as we were transported between wartorn London and the tranquil countryside home of Tom Oakley, who had begrudgingly taken in evacuee Willie Beech.

The SMASH cast sang and danced through the Michelle Magorian story, made famous by the late John Thaw film playing to a much-deserved sell out audience. Alan Faulkner was a heart-warming Tom, suitably tetchy at the beginning and gradually softening as he mellowed through his care for the boy.

Ryan Carter was also superb, alternating between a suppressed frightened child in London, to a carefree country boy and Sam Coleman as Zach is certainly a name to look out if he decides on a stage career. 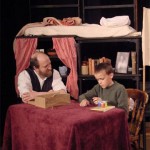 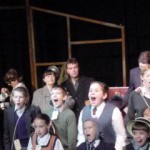 The evacuees setting out on their ‘Holiday’ 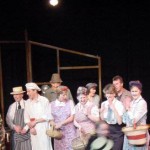 Have you heard about these vacuees? 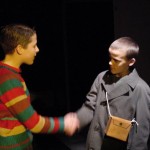 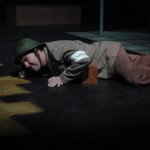 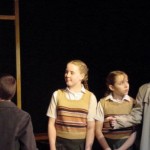 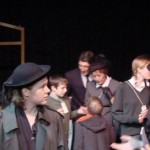 Will and Mrs Beech at Paddington Station 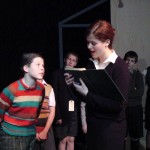 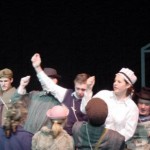 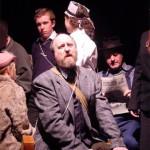 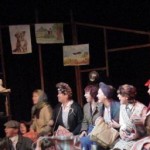 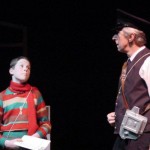 Zach trying to dodge the ticket collector in London 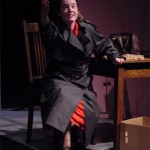 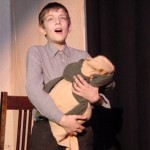 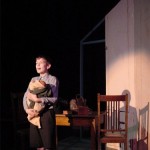 Will and Trudy – Picture Lullaby 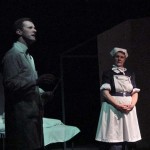 Mr Stelton the psychiatrist and Matron 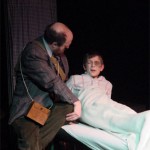 Will in hospital having been rescued 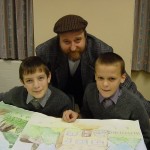 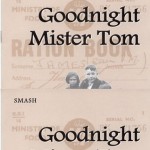 Arnold Wesker once said that the memoir of an outsider inevitably tells us as much about the society he’s outside as it does about himself. So it is apt that, in Michelle Magorian’s musical Goodnight Mr Tom, the audience learns about wartime Britain through the eyes of four outsiders.

Having read the powerful novel, I did not anticipate empathising with William Beech’s mother, yet Lucy McGann’s portrayal movingly contextualises Mrs Beech’s violence and verbal abuse in her own vulnerability.

Will is an outsider at school; bullied by his peers as well as his mother. He only becomes integrated into society through evacuation to the home of Tom Oakley, who lives on the margins of his close-knit village, and friendship with Zac – another evacuee who is alienated both by his Judaism and by his theatricality.

I was lucky enough to see Will played by each of the two boys chosen for this demanding role. Ryan Carter brought out the joy buried inside the troubled child and Andrew Branson’s pure singing voice provided poignancy to the character’s heartbreaking situation. Both young actors created a believable friendship with Zac, who was played with just the right combination of comic exuberance and emotional sincerity by Sam Coleman.

As Tom, Alan Faulkner shone particularly in his vivid recreation of his character’s love for his long dead wife.

These principal actors were supported by an ensemble who brought the wartime communities vibrantly to life, in wonderful costumes designed by Shirley Aldridge.

Director, Sheila Tallon, and musical director, Peter Farndon, can be justifiably proud of their cast.