Ours was to have been the world amateur premiere but another Society pipped us by a few weeks on the performance dates! This musical is in the same inimitable Daly-Parker style as Follow the Star.

We begin at the beginning – the Creation, the Garden of Eden, Adam and Eve and the Flood and Noah, culminating in Moses and the Ten Commandments. (The last line of the play – to Moses – is “And keep on taking the tablets”).

Several characters from Follow the Star were there – Olly and the Angels, Chicago, and there was something vaguely familiar about Lucifer! We resisted the temptation to ask people to play same roles they played in Follow the Star, although the actor playing Jelly said that she didn’t mind being cast in the same mould.

Proceeds were for a church building in Rangoon as the Methodist Church in Myanmar (Burma) was growing rapidly. 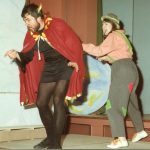 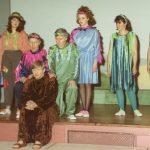 Olly considers where it has all gone wrong 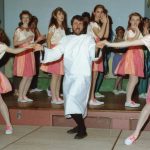 I am the greatest! 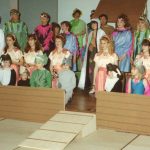 All the animals in the ark 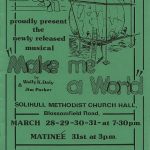