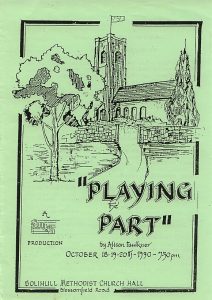 A “who dunnit” from the pen of one of our SMASH members. The scene is set in the sitting room of the vicarage of St Michael’s, Paxton.

This review appeared in The Solihull Times, November 23rd 1990:

Solihull Methodists are indeed blessed in being able to boast a talented playwright among their number.

Alison Faulkner’s first full length play was a treat. It had all the whodunit ingredients: the benign other-worldly vicar startled by the events unfolding around him, the beautiful young wife, the unscrupulous property developer, dubious goings-on in the crypt and the blood-bespattered corpse in the sitting room.

But all was not as it seemed in more ways than one: a character forsook the stage in mid-scene to start a new life with a confused member of the audience. The ramifications of this were pursued with hilarious and mind-bending logic until we were left unsure who exactly was a member of the cast and who was not!

All the actors played with zest. Especially noteworthy performances were given by Margaret Hughes, confident as the Vicar’s housekeeper, Frances Jones as the village busybody with a talent for detective work and Judith Farndon, totally credible as the “Director”.

Alan Faulkner, the hapless playgoer trapped in the action by his incautious and noisy consumption of mint imperials, had us wondering where this ingenious plot was going to take us next, and where reality ended and dramatic illusion began.

This play deserves to find new audiences and entertain them as delightfully and as beguilingly as it did this one.