An evening of entertainment from the 1930s

SMASH’s second production  – an evening of entertainment from the 1930s – just sort of “grew”: midsummer madness we called it!  The audience sat at tables for the final performance and enjoyed a supper served in the two intervals.  The purpose was to strengthen the fellowship which developed during “Follow the Star”, to give the opportunity for members of the group to develop their talents and to entertain our audiences!   The proceeds were used to buy stage lighting equipment for the church hall and for the Church Structure Fund (as the main Church building appeared to be sinking into marshland).

Some of our audiences’ favourites first appeared during this production including Cheek to cheek (presented as a love story between a very tall man and a very small lady) Top Hat (with the “men” battling with tap dancing) and Lullaby of Broadway (with a special arrangement by our musical director).

Act One included Anything Goes, Battle of Hastings, Love is the sweetest thing, Putting on the Ritz, Mad dogs and Englishmen,  I want to be loved by you, Don’t put your daughter on the stage Mrs Worthington, Lazybones and Get Happy.

Act two was the one act play “Hands across the sea” by Noel Coward.

Act three included Let’s face the music and dance, Brahn boots!, Have you ever felt lonely, London Pride, Blue moon,  I’ve been to a marvellous party. 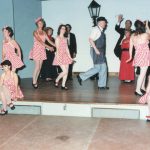 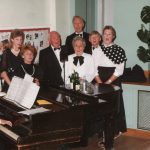 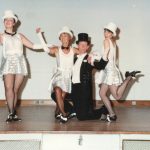 3 Putting on the Ritz 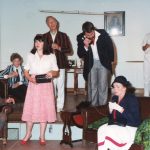 5 Hands across the sea 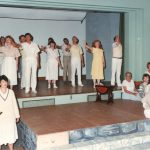 6 Come on, get happy 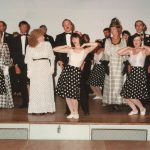 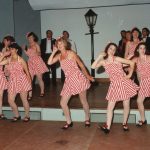 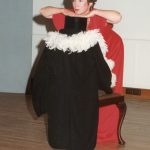 9 I wanna be loved by you 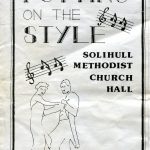