After the success of Born For Us All, SMASH experienced great difficulty in deciding which production should follow. Our musical director found a cantata entitled Singing Dancing Carpenter and SMASH wondered whether the authors would allow the work to be developed and presented as a full scale musical. Their comments from the programme explain what happened next.

We wanted to do two related things: to celebrate the life God offers, and to challenge all that prevents people from benefiting from it: greed, fear, prejudice or just plain apathy. It would be a single song about a carpenter who loved life, and wanted to free people from all that prevented their enjoyment of it.

Like Topsy, the idea ‘just growed’. We called it a ‘musical’ because ‘cantata’ would have been too dignified a description, and yet we wanted it to be accessible to churches and groups with fairly small resources. So we used narrators, rather than dramatic dialogue, while leaving open the possibility of the addition of simple drama, dance and mime. During its first year of publication, many performances of varying complexity were staged, showing that the work was indeed flexible and effective.

Then along came SMASH with a challenging question. Could the piece actually be written as a full-scale fully staged musical? The most obvious difficulty was that the lyrics link the time of Christ with contemporary issues and ideas: how was that to be achieved in a stage play? The ‘play within a play’ format seemed an attractive possibility, and the work commenced. The telephone and fax lines between Solihull, Leicester and Glenalmond glowed in the night sky as ideas were exchanged, rejected, refined, aborted, resurrected and finally knocked into shape. The result of all that, here performed for the first time, is not simply a ‘life of Christ’, but an exploration of the effect that life has on those of present day people who dare to take it seriously – but not that seriously.

This production welcomed 17 newcomers to SMASH.

Proceeds for the Church Development fund and to help fund the nursing training of a Kenyan who received support from Solihull Methodist Church for her education.

Part of the company, Zacchaeus and the tree, and Jerusalem blues: 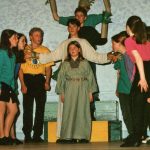 2 Zacchaeus and the tree 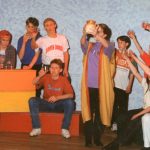 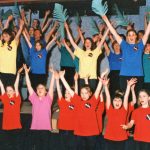 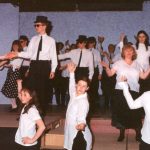 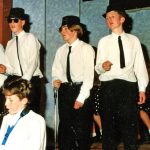 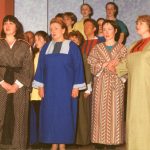 7 Some of the cast 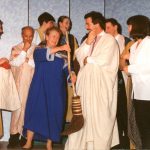 8 I won’t be needing this now! 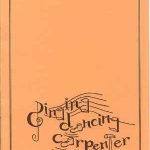